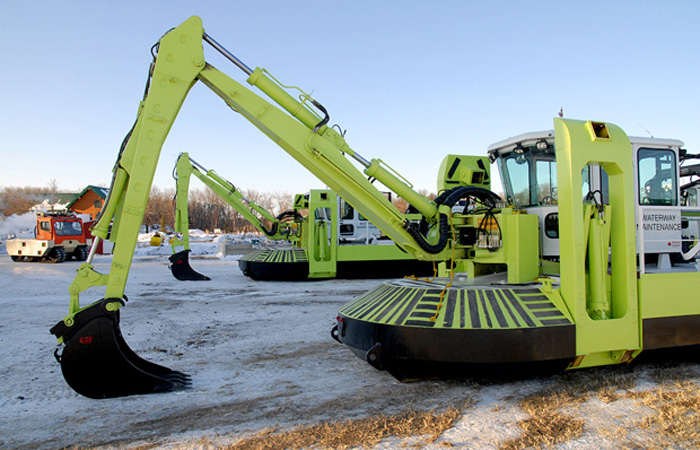 The province has announced that it will begin its annual ice cutting this week on the Red River to reduce the potential for ice-jam flooding.

“Predicting when and how our rivers ice will break up naturally is complex due to varying conditions,” said Infrastructure Minister Ron Schuler. “Knowing this, our government is remaining vigilant and prepared by implementing the ice-jam mitigation program. We have committed to investing in strategic flood-control operations in order to protect Manitobans in the chance of a high water event due to ice jamming.”

The ice-jam mitigation program, which consists of cutting and breaking river ice, was launched in 2006 to reduce the risk of flooding caused by ice jams on the lower Red River and several other rivers. Ice jams form when floating ice is blocked from moving downstream, forcing water to backup and overflow river banks.

Remote controlled ice-cutting units and three Amphibex icebreakers are used each year to cut and break approximately 28 kilometres of ice on the Red River from Selkirk to Netley Creek for an approximate width of 100 metres. Ice cutting and breaking is also often completed on the Icelandic River at Riverton and at the outlet of the Portage Diversion.

Notices have been posted in areas where the ice-cutting machines will be working and river users are advised as a safety reminder to stay off the ice where notices are posted or where evidence of recent ice cutting is apparent. Ice fishers are also reminded to remove huts or other materials in the areas covered by the ice-mitigation program.

The icebreaking and ice-cutting equipment is operated and maintained by Winnipeg Environmental Remediations Inc., a Manitoba company that provides comprehensive environmental services, general contracting and civil earthworks to a variety of industries in both the private and public sectors throughout Canada and the United States.