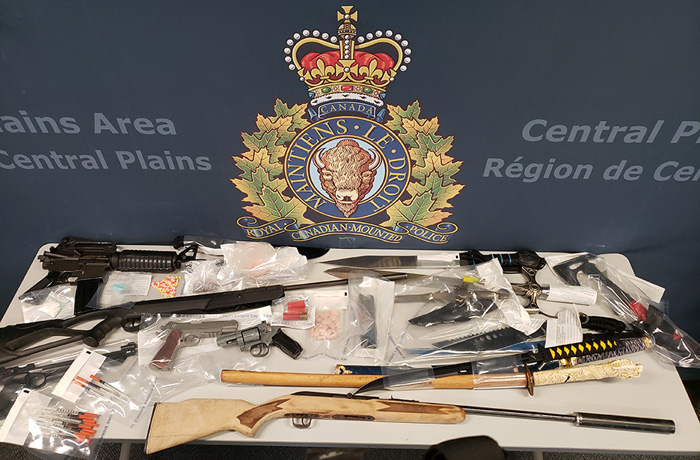 Portage la Prairie RCMP have made four arrests in connection to a recent search warrant that resulted in the seizure of a quantity of drugs and weapons, including a semi-automatic rifle affixed with a prohibited suppressor.

On April 30, 2021, at approximately 3:15pm, Portage la Prairie RCMP, with the assistance of the RCMP Emergency Response Team, executed a Controlled Drugs and Substances Act warrant at a residence located on Mobile Street in Portage la Prairie.

As a result of the search, Police located and seized 27 grams of fentanyl, 6 grams of cocaine, an undetermined amount of heroin, several loaded needles, a semi-automatic rifle affixed with a prohibited suppressor, several knives and some BB and Airsoft guns.

RCMP report that 48-year-old Scott Hunter of Portage la Prairie was arrested and is facing numerous drug and firearms related charges in connection to this investigation.

Police say that three other adults were also arrested in connection to this investigation.