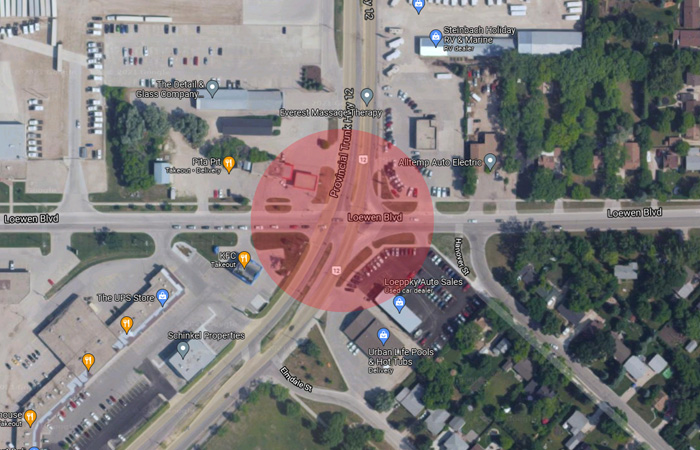 In partnership with the City of Steinbach, the Manitoba government is investing $4.15 million towards an $8-million improvement project at the intersection of Provincial Trunk Highway (PTH) 12 and Loewen Boulevard that will improve the safety for the community and provide economic opportunities for the region.

“As part of our Budget 2021 commitment to advancing strategic infrastructure across the province and improving the safety of Manitoba’s highways, we are pleased to collaborate with local officials to undertake this important project that will benefit the growing Steinbach community for years to come,” said Premier Kelvin Goertzen.

“Our government has committed to improving the quality and efficiency of important infrastructure in areas of need,” said Infrastructure Minister Ron Schuler. “We’ve identified the intersection of PTH 12 and Loewen Boulevard as a priority project, recognizing that our shared investment with the City of Steinbach will improve the intersection to accommodate increased traffic needs and create employment opportunities for Manitobans and support our province’s economic post-pandemic recovery to help our economy rebound.”

Intersection improvements will include the addition of a second left-turn lane for southbound traffic on PTH 12, new pavement, curbing, traffic signal relocation and utility relocation. Loewen Boulevard will see the addition of a southbound right-turn cut-off, along with additional east and westbound left-turn lanes to increase the capacity of the intersection. The project will also include the replacement of a culvert on PTH 12 on the south side of the Loewen Boulevard intersection and relocation of Manitoba Hydro infrastructure. The project will coincide with a City of Steinbach project, which will include improvements to the land drainage system and active transportation corridors along Loewen Boulevard.

The City of Steinbach will manage the entire project so that work can be combined and managed under a single construction contract.

“We are pleased to be partnering with the province to redesign an important intersection in our city that aligns with our commitment to infrastructure and growth,” said Mayor Earl Funk, City of Steinbach. “This project will increase capacity along a major traffic corridor while improving overall traffic flow in the city. We are thankful for the support of the province to complete this significant project.”

The minister noted the project is anticipated to start in spring 2022 with an anticipated completion date of fall 2023.