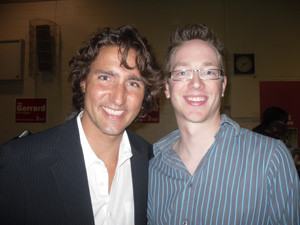 Lee Fehler, the Steinbach Liberal candidate attended the recent campaign kickoff on Wednesday, August 31st for the Manitoba Liberals. Guest, Justin Trudeau, the MP for Papineau in Quebec attended the event as well and helped to boost the Liberal party into the election.

Local candidate Fehler commented on the occasion saying  that “It was great to have Justin Trudeau help start the campaign off on a high note. I think the message is pretty clear in this election that the last two decades of polarized politics in Manitoba have not benefited us all that well. Our province has become divided between north versus south, urban versus rural and suburban. The push and pull of the NDP and PCs between these areas has always left one part in the dark. The Liberals are here to say that this party will not pick and choose or alienate certain regions, you do not have to pick left or right, that we can balance budgets and maintain the quality of our social services.”

Dr. Jon Gerrard, leader of the party also revealed at the event that if elected the Liberals would pledge to start a Katimivik project here in Manitoba. Katimivik was started by Pierre Elliott Trudeau, Justin’s father, as a way of building bridges in youth across the different regions and languages of Canada. As part of Katimivik young people travel through communities in the country where they work and volunteer in those communities.

Fehler added that “I have gotten to know some of the members of Katimivik as they have passed through Steinbach and I have seen the impact this has made on our city here. I think that a project like this has the ability to mend some of the rifts between our communities throughout this province. It also has the second benefit of aiding in volunteer projects to better our many communities here in Manitoba.”

The Liberals will reveal their full campaign platform shortly after the writ has dropped in Manitoba.