Fehler follows up on Liberal announcements 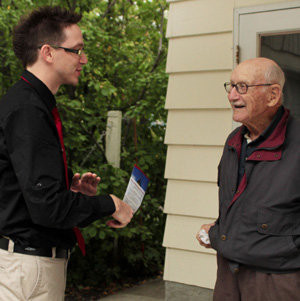 The Liberals have made several announcements regarding some of the issues they hope to tackle if elected on October 4th. One such announcement regarded post-secondary education in the province. Local candidate Lee Fehler says that “under the NDP the post-secondary institutes have suffered a little in this province. While new buildings have been initiated this has done little to solve much of the old infrastructure in our universities. The poor performance of our post-secondary schools in surveys such as the annual Maclean’s issue is also a factor in the interprovincial migration loss.”

As part of the announcement the Liberals will contribute $57.2 million of the budget for tuition help to those who achieve high grades, perform well, or show leadership skills.

A second issue brought up in the preceding week is the issue of urgent care facilities and ERs. The Liberals have earmarked $18 million toward making sure that urgent and emergency health care is accessible for all Manitobans.

The Liberals also unveiled their Liberals Senior Strategy. As part of the proposition was promise of legislation for standards and outcomes to protect the elderly in personal care homes. Fehler also addressed this saying that “the NDP have forgotten about their promises toward the elderly. As part of the Liberal party I am here to say that we are here to guarantee the health and safety of our most vulnerable seniors.”

Manitoba Liberals have also promised broadband access for all Manitobans with $1.9 million set aside to implement this issue affecting rural residents. “All Manitobans deserve proper access to the internet in order to remain competitive in the global world and to improve education for those in rural areas” Fehler said.

Finally the Liberals have some earlier announcements that Fehler also hopes will benefit Steinbach. Including the implementation of a further $1.9 million to addictions prevention, which he hopes can be used to help to increase the size of frontline service staff in this field for Steinbach. The Liberals have also promised to increase day care spaces. This is another issue Fehler says that “the NDP have had 12 years to follow up on this promise and it has fallen flat. We here in the Liberal party have made day care spaces and early childhood education a priority, this is certainly an issue that goes toward solving some long-term problems in addition to its immediate benefits.”