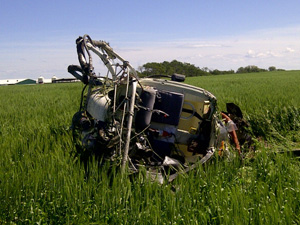 On July 4, 2012, at 11am, RCMP, Fire and EMS responded to the scene of a helicopter crash, approximately 6 kilometers south of Silverton, Manitoba. Silverton is located approximately 8 km east of Russell.

A Bell 206 Jet Ranger, owned by a company from North Bay, Ontario, lost control and plummeted to the ground while spraying crops in the rural farmland area.

Police say that the helicopter was destroyed upon impact. The male pilot was able to exit the aircraft and walked to a farmyard for help. There were no other people on board at the time of the crash.

The pilot was been taken to hospital for treatment and the extent of injuries are currently unknown.