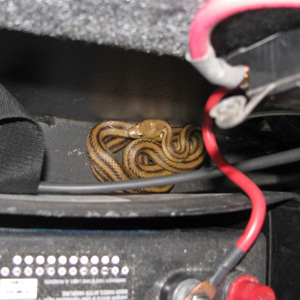 Officers at the port of Emerson encountered a yellow rat snake during a vehicle exam on June 5.

On June 23 and 24, CBSA welcomed officers from Manitoba Conservation and Environment Canada for an export enforcement project in Emerson and Tolstoi. During the two-day blitz, officers examined south bound fishermen and hunters, including 78 vehicles and 217 travelers. Several infractions were also noted: five provincial offenses for possessing fish packed so that number cannot be readily counted; and one provincial offense for possessing fish packed so that species cannot be readily identified.

The following are some additional highlights at select border crossings in southern Manitoba this past month.

On June 5, CBSA officers were examining a carnival operator’s dormitory-style trailer when they found a live snake inside an exterior storage compartment. Officers determined the yellow rat snake likely slithered inside the trailer’s storage compartment in the southern U.S.  The driver returned to the U.S. to return the reptilian hitchhiker before the trailer would be permitted to enter Canada.

On June 15, officers examined a vehicle from British Columbia  and found a license plate that was reported stolen, blank credit cards and an electronic card scanning device. The subject was arrested and turned over to the RCMP; the investigation is ongoing.

A Manitoba woman arrived at the port of Emerson on June 24 with a horse and declared its value at $1,500. Officers conducted further checks on the value of the horse and determined the horse was sold for $18,000. The woman admitted she was trying to save money on taxes. The horse was seized and the woman was required to pay $9,310 penalty to reclaim it. Had she been truthful she would have paid $900 in GST.

On June 28, officers at the port of Emerson seized a revolver from a couple travelling to Alaska. The couple did not declare any firearms, but did say they had a permit to carry a concealed weapon in the United States.  The vehicle and contents were examined and officers uncovered a loaded .22 calibre revolver in a bag under the front seat of the vehicle. They were issued a $1,000 penalty.

On June 9, officers at the port of Gretna seized a parcel containing 90 pills of DHEA, a controlled drug in Canada. The traveller had ordered the pills on the Internet and was returning to Canada with the parcel, which he declared as health supplements.

On June 10 at the port of Boissevain, officers refused a North Dakota man entry into Canada for having a criminal record that included five previous DUI convictions.

On June 10 at the port of Coulter, a Louisiana man coming to visit for one day was refused entry for his criminal conviction for drug possession.

On June 24, officers at the port of Lyleton refused a Pennsylvania man entry into Canada. The man was transiting to Alaska. During background checks officers noted the man had several criminal convictions, including DUI, assault, theft, etc. Officers also noted the man had attempted entry the previous day in Saskatchewan, but was also refused entry.

CBSA wants to prevent the entry of unwanted guests, especially the six-legged kind. Therefore, during this summer vacation season, CBSA wants to remind northbound travelers to leave their firewood back at the campsite, as importing firewood from the United States is restricted or prohibited and must meet strict requirements.

The Canada Border Services Agency is committed to keeping our borders safe. If you have information about suspicious cross-border activity, please contact the Border Watch Line at 1-888-502-9060. For information on CBSA, please call 1-800-461-9999.