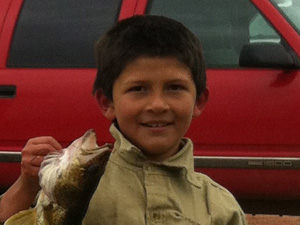 On July 26, 2012, at 10:45am, RCMP Roblin Detachment were contacted and advised that a 10-year-old boy, identified as Tyrone Alexander Podollan, was missing. Police say that despite the family’s attempt to find him, they have been unable to locate him.

Tyrone is described as small build, about 4 feet tall, 80 lbs, brown hair and brown eyes. He is wearing a red long sleeve shirt with a white t-shirt underneath, blue jeans and camouflage rubber boots.

RCMP report that Tyrone was last seen on property owned by his family near a cottage area close to Cupar’s Creek near Lake of the Prairies in Manitoba.

Currently, the Dauphin RCMP Police Service dog is on scene searching along with Roblin Detachment members. The RCMP Search and Rescue Team with the assistance of the Manitoba Office of the Fire Commissioner have been dispatched to the area to assist with the search.

Anyone who has information on the whereabouts of Tyrone Alexander Podollan is urged to call the RCMP Roblin Detachment at 204-937-2164 or their local law enforcement agency.

Tyrone Alexander Podollan has been located alive and well in a small bush area near where he was last seen by family. The area had been searched, however, it appears that the boy was constantly mobile. Tyrone was found by family.

Tags: Lake of the Prairies, Missing