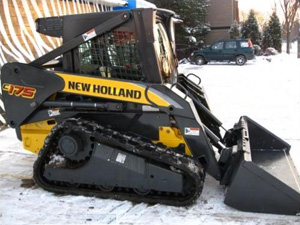 Photo is not the exact machine stolen, but of similar description.

Steinbach RCMP are asking the public for assistance in identifying the suspect(s) involved in a recent theft of a truck, trailer and skid-steer that occurred over the long weekend. RCMP are reporting that this major equipment theft occurred sometime between Saturday October 6 and the morning of Tuesday, October 9, 2012.

Police say that the suspect(s) stole a truck, trailer and skid-steer belonging to Hillside Construction from their business parking lot on Clearsprings Road in Steinbach. The truck is described as a black 2007 Ford F350 Crew Cab with “Hillside Construction” decals on all sides of the vehicle bearing Manitoba Licence Plate CDX 366 and the trailer is a 16 foot Penner utility trailer with fold up ramps on the back bearing Manitoba Licence Plate CNL 010. The skid-steer is described as a 2008 New Holland C175 skid-steer, yellow and black in colour, on tracks with a black bucket. Total value of the equipment and vehicles stolen is upwards of $80,000.

RCMP continue to investigate this theft and are asking for the public’s assistance in identifying the suspect(s) responsible. If you have any information you are asked to contact the Steinbach RCMP at 204-326-4452 or CrimeStoppers at 1-800-222-8477(TIPS). You can also SUBMIT a tip online at www.manitobacrimestoppers.com or text TIPMAN plus your message to Crimes(274637).