Steinbach’s Fire Chief to step down 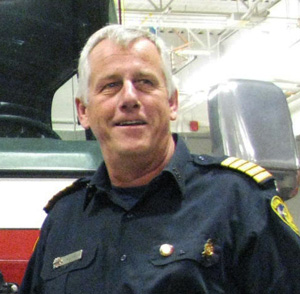 Mark Loewen to step down as Steinbach’s Fire Chief.

After 12 years, Mark Loewen has decided to step down as Steinbach’s Fire Chief. Loewen’s announcement is not a surprise as he has been candid for a while about leaving and gaining some well-deserved free time.

“It’s time for some new blood,” says Loewen of his decision. “I’ll still stay on as part of the department, but not in a management role.”

Joining the Fire Department more than 35 years ago, Loewen describes his recruitment by the Fire Chief at that time, “I caught him at a sweet moment and he took me on and sent me to Fire College.” He notes that this is certainly not how things are done today. The department has more than doubled since he started.

“I have enjoyed serving the community; I’ve enjoyed all of it,” states Loewen when asked what he has liked the most, quickly followed with, “and the camaraderie.”

Mayor Chris Goertzen commented on the departing Chief, “Mark Loewen has been an excellent leader for the city fire department. His many years of service have made our community safer and have created a fire department that is an example for the rest of the province.”

Loewen will maintain the position of chief until a suitable replacement is identified and duties can be transitioned. The Fire Chief’s role has always been part-time, but with Steinbach’s continued growth the City is evaluating the possibility of making the new Chief full-time. The position is expected to be filled for early September.