On April 21, 2015, just before 11:30am, Oakbank RCMP responded to a single-vehicle collision involving a semi-trailer on Cooks Creek Bridge. The scene of the collision was seven kilometres east of Dugald on Highway 15 in the RM of Springfield. 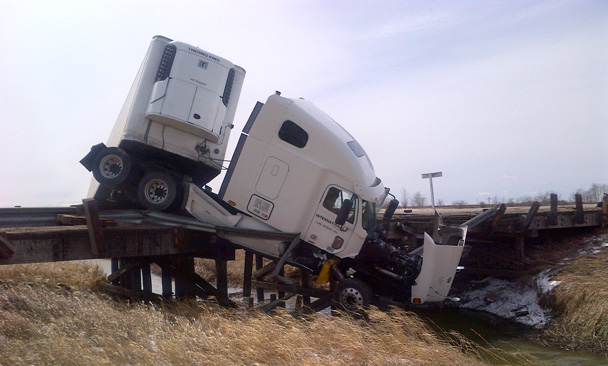 Semi-trailer collision on Cooks Creek Bridge in the RM of Springfield.

Police investigation shows that the male driver of the semi, from Nevada, was traveling east when he encountered slush on the road. With the extreme winds over the bridge and the slippery road conditions, the driver lost control of the vehicle. The semi-trailer slid and completely blocked the bridge over Cooks Creek with the cab of the vehicle hanging over the bridge.

RCMP report that the driver did not sustain any injuries and alcohol is not considered a factor in the collision.