The Canada Border Services Agency (CBSA) is pleased to share key highlights for 2015 from its various operations in Winnipeg, including airport, commercial and inland operations. This year, officers at Winnipeg’s James Armstrong Richardson International Airport welcomed nearly 327,480 travellers on over 5,480 international flights. 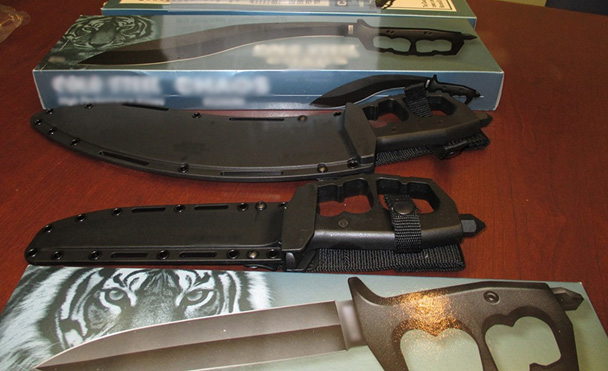 There were over 300 contraband seizures including 151 prohibited weapons and firearms. For example, in August, officers seized 35 prohibited weapons in a shipment declared as “cutlery”. The package, destined for an Alberta address, contained 30 five-pointed shurikens and five knives with a push dagger handle.

There were also 41 narcotics seizures. In June, officers seized two litres of GBL in a shipment from China. GBL is a controlled substance in Canada and the precursor drug used in the manufacturing of gamma-hydroxybutyric acid, one of the substances used as a “date rape drug.” The importer was arrested by the Winnipeg Police Service with the assistance of the CBSA.

The CBSA plays a critical role in keeping weapons and drugs off the streets of Winnipeg by stopping them at the front line. The significant cases from last year are part of our officers’ diligent efforts to pursue these acts of criminality to protect our communities from sexual predators and fraudulent immigration activities. ~ Kim R. Scoville, Regional Director General, Prairie Region, Canada Border Services Agency

Some highlights from Winnipeg’s criminal investigations and inland enforcement units include: