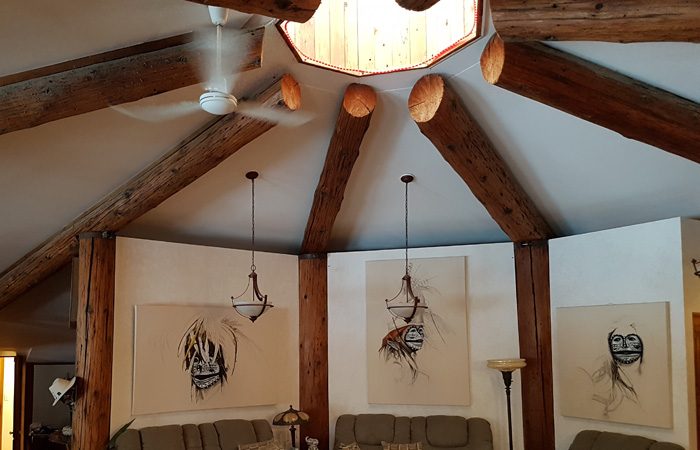 Centre of home is framed by eight big vertical poles. These are recycled poles, purchased from Manitoba Hydro.

I had been told that if we wished to write about significant alternative houses in southeastern Manitoba, we needed to include Heather Bishop’s house near Woodmore, a hamlet east of Dominion City. Heather is an artist, known for her music and painting, but she is also a different kind of artist, where her art is expressed in her building vision and building skills.

Heather’s house is striking. The octagonal centre is framed by eight big vertical poles. These are recycled poles Heather was able to purchase from Manitoba Hydro. These eight vertical poles form the corners of the octagon. Eight diagonal poles top these vertical poles and come together around a sky-lite in the centre. These diagonal poles hold up the roof. This octagon encompasses the kitchen-living-dining part of the house. On the outside of the octagon to the north are the bedrooms, a music studio, and a root cellar, and to the south, a greenhouse. The outside wall of the house is a double stud wall with continuous vapour barrier resulting in R44 insulation. The ceiling has R80 insulation. The concrete floor is insulated from the soil below, so it is an effective thermal mass. Soil has been heaped against the north wall, so the bedrooms have no windows; just a small exit door that can be opened in an emergency.

The southern wall, which is quite wide, is entirely windows, and recycled windows at that. Because they are recycled, not all windows are the same size, but they are arranged in such a way that unless one looks for it, this size variation is not noticeable. Heather points out that not only did she design the house, she was also the carpenter who built it. Because of this the variable window size was not a problem.

Heather has tight fitting insulated inside blinds on all her windows. She has two types. Some of her blinds are roll-down. These form a friction fit with the window frame, so that as they come down, with just a bit of tucking they very effectively insulate the window. In other windows the insulation is more shutter-like, although still on the inside. Heather concedes that insulating the windows in this way results in very cold windows, so condensation can be a problem, but the condensation dissipates quickly once the blinds are opened. Heather says that another problem occurs if the blinds are not opened be-fore the sun gets hot. The sun may then heat up the windows to the point where they shatter.

Heather’s house is quite big, 3000 sq. ft. So even though the south facing windows result in significant warming, on cloudy winter days this is not enough. She supplements with wood heat. Although Heather buys her wood cut and split, she is quick to point out that if she had the energy to harvest it, the woods around her home would easily yield the necessary wood sustainably.

Several years ago Heather installed an array of solar panels, benefiting from the Manitoba Hydro pro-gram (which has now been discontinued). Hers is a large array set up on the ground in a field close to the house. The 16 KW system cost $60,000, of which Hydro paid $18,000 and she paid $42,000. This results in an annual saving in her hydro bill of about $2,000.