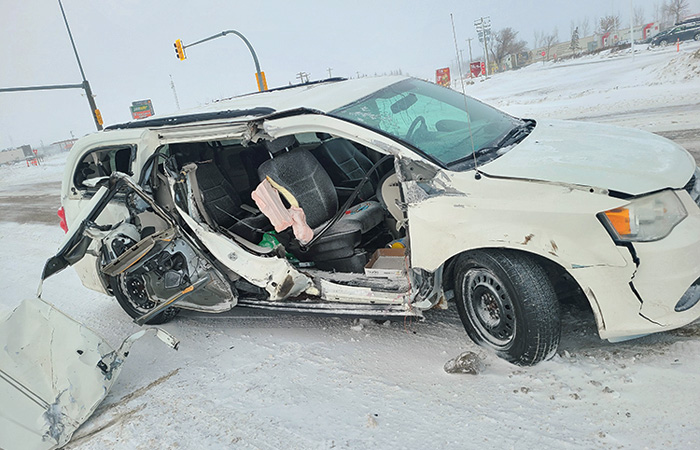 Damage to suspect's van after colliding with semi-trailer at Deacons Corner.

A 31-year-old Sagkeeng First Nation man has been arrested and is facing numerous charges after the vehicle he was driving drove into a semi-trailer that had been stopped at Deacons Corner.

On February 1, 2022, at approximately 3:35pm, Oakbank RCMP and Springfield Police Service received a report of a two-vehicle collision at a location on Highway 1 at Provincial Road 207 (Deacons Corner).

Police say that while en route to the scene, two more calls were received regarding the collision. As a result of the calls, officers learned ithat the driver of one vehicle had fled on foot into a neighbouring business, where he was barricading the door and blocking members of the public from entering or exiting.

Officers arrested the male, a 31-year-old Sagkeeng First Nation man, at the business. He showed signs of impairment and was read a breath demand. He registered two readings at double the legal limit.

RCMP report that the suspect was charged with impaired driving. He was also issued a number of tickets related to the incident.

Police noted that there were no physical injuries reported as a result of this incident.