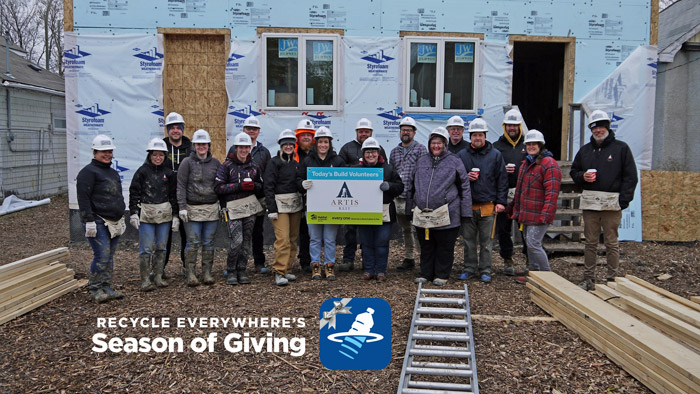 Recycle Everywhere , the organization responsible for the collection of non-alcoholic, non-dairy beverage containers in the province, is teaming up with Habitat for Humanity Manitoba to give back during its annual Season of Giving promotion.

“Manitobans are some of the best recyclers in Canada and we are so excited to announce on Giving Tuesday that their recycling efforts this holiday season could result in as much as a $20,000 donation from us to Habitat for Humanity Manitoba,” says Sheri Moerkerk, Director of Marketing and Communications at Recycle Everywhere, the program administered by the Canadian Beverage Container Recycling Association (CBCRA).

“Habitat Manitoba is very pleased to be working with CBCRA on their Season of Giving campaign because it encourages people to be more environmentally conscious and rewards them for being so while providing funding to Habitat Manitoba for us to continue our work to help build safe, decent and affordable housing for purchase by low-income working families,” says Sandy Hopkins, CEO of Habitat for Humanity Manitoba. “In addition, we are pleased CBCRA will provide Recycle Everywhere bins to new Habitat homeowners.”

Earlier this year Recycle Everywhere announced that, in 2021, 72% of all eligible beverage containers in the province were collected for recycling and 80% of all PET plastic bottles were recovered, a statistic that ranks Manitoba among the best performing jurisdictions in Canada.

“With the momentum of Season of Giving and this partnership with Habitat for Humanity Manitoba, we are also challenging Manitobans to make December the best beverage container recycling month in the province’s history,” adds Moerkerk.