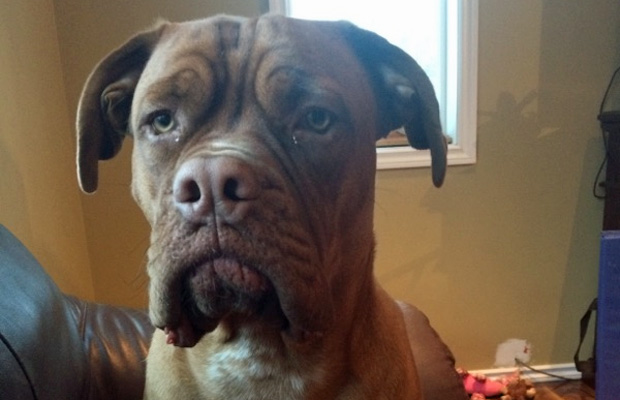 Boomer, a French Mastiff shot and killed in a rural robbery incident.

A Peguis man is facing numerous charges after being arrested by Teulon RCMP in connection to a robbery and animal shooting investigation.

On September 26, 2017, at approximately 2:15pm, a male suspect entered a rural residence near Teulon, Manitoba. Police say that the suspect had entered through a window and then went through the home gathering a bunch of items, including five firearms.

Investigation shows that as the male suspect was making his way through the home when he encountered Boomer, a French Mastiff. The dog was shot three times with a weapon that did not belong to the homeowner.

As the homeowner arrived back at the residence, he noticed a man exiting the home. Teulon RCMP were called immediately and local officers were able to locate and arrest the fleeing male.

RCMP report that 18-year-old Isaiah Flett from Peguis, Manitoba, was arrested and is facing numerous charges.

An officer from Police Dog Services attended the scene with Police Dog Eddie and was able to quickly recover the firearms the suspect had hidden in the bush. Police noted that Boomer was pronounced deceased at the veterinarian’s office.