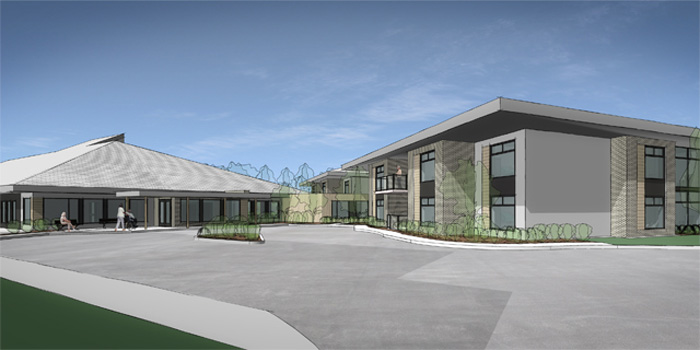 Shortly after announcing plans to build a 143-bed personal care home in Steinbach, the province is moving forward with construction of a similar 110-bed facility in Carman, Manitoba.

“Analysis has consistently shown a demand for additional personal care home spaces from Manitobans living in Carman and surrounding communities,” said Health, Seniors and Active Living Minister Cameron Friesen. “We are pleased to be moving forward with construction of this worthwhile project, which builds on our commitment to provide 1,200 personal care home beds to seniors closer to home. I want to congratulate the entire region for its tireless efforts in bringing this project to the finish line.”

The new facility will feature clusters of single resident rooms with washrooms/showers that form a local neighbourhood of 10 to 12 rooms. Each cluster will include dining and activity spaces, as well as large, multi-purpose gathering spaces and small, private lounge areas. The facility will also include storage, offices, staff areas, maintenance, laundry and housekeeping service areas and exterior patios, walkways and parking.

“The long-term care needs in our region are significant and families in the area are looking for the housing options to meet the care needs of their loved ones,” said Jane Curtis, CEO for Southern Health-Santé Sud. “We know these spaces are needed as soon as possible, and we’ll continue to work with the project partners and the Manitoba government to move this important project forward.”

The new site in Carman will be constructed in two phases. In the first phase, a new, 80-bed facility will be constructed next to the existing 70-bed personal care home built in 1967 and Boyne Towers. This facility will accommodate residents with general dementia or other special needs. In the second phase, the current building will be renovated to add 30 beds and modern resident support space.

“With this announcement today, Boyne Care Holdings will be able to achieve its goal of a fully integrated aging-in-place campus for older adults and those requiring personal care in the Boyne region,” said Ray Franzmann, chair of Boyne Care Holdings, which includes elected representatives from five municipalities. “The leadership the province has shown by working collaboratively with community groups in their commitment to address additional personal care beds in Manitoba is truly inspiring. This shared investment by Boyne Care Holdings and the Manitoba government will result in a holistic care environment for generations to come.”

Boyne Care Holdings, which is represented by elected officials from the Town of Carman and surrounding municipalities of Dufferin, Thompson, Roland and Grey, developed the Carman project proposal with the regional health authority. The province will provide capital funding, with the rest provided by Boyne Care Holdings, the minister noted.

Project costs are not being released at this time to ensure the tendering process is not affected, Friesen said.