Two ATVs stolen between May 18 and 23, police investigating 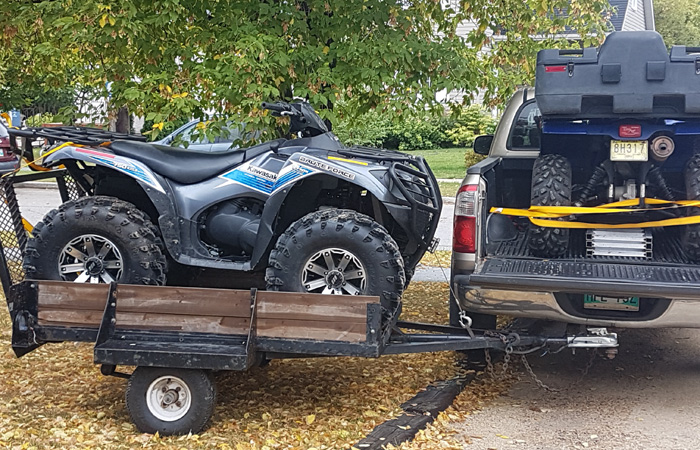 Steinbach RCMP are currently investigating the theft of two ATVs that were recently stolen near Richer and Highway 12, near Hanover Road.

Police say that the ATV had been on the back of a broken down trailer at a location on Highway 1 near road 45E, just past Richer. When the owner returned in the morning to fix the trailer, the ATV was gone and the trailer remained on scene.

On May 23, 2020, Steinbach RCMP received another report of a stolen ATV. In this incident, the ATV was taken from a residence on Highway 12, just south of Hanover Road, and was last seen on May 22 at 10pm.

The second ATV is described as a 2013 Suzuki KingQuad 500 with camo plastics, plate number 1D555 and VIN: 5SAAM45P0D7101318. This particular ATV has a custom wood box on the back, as well as two hunting rifle mounts on the front rack.

If you have any information regarding these crimes, you are asked to contact the Steinbach RCMP Detachment at 204-326-4452 or CrimeStoppers at 1-800-222-8477. You can also submit a secure tip online at manitobacrimestoppers.com.

Rite-way Plumbing, located in Mitchell, MB, is a full-service plumbing company certified to provide a full array of plumbing and heating services in Steinbach and Southeastern Manitoba.