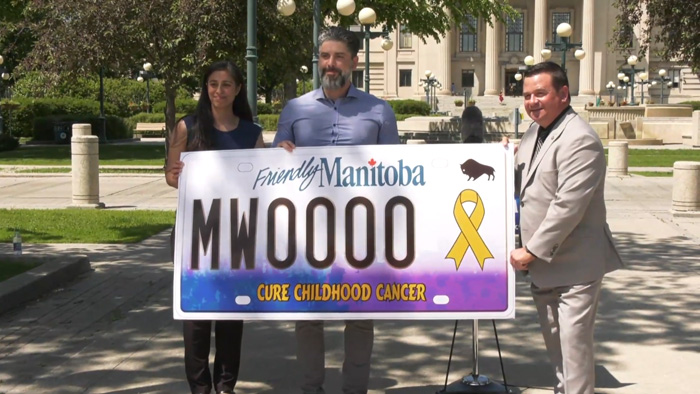 The province of Manitoba has announced that its newest specialty licence plate will financially assist in ongoing research into childhood cancer.

The plate features a bright gold “Cure Childhood Cancer” slogan across the bottom, in addition to the familiar cancer awareness ribbon. The new plates, which are administered by Manitoba Public Insurance, will be available for purchase today.

The cost of each set of plates will be $70, with $30 from every plate purchase going toward the Madox’s Warriors Foundation, which is committed to consulting with the Children’s Hospital Research Institute of Manitoba and CancerCare Manitoba to determine how funds would best be utilized prior to making donation decisions.

“Madox’s Warriors are honoured to be collaborating with both the government and Manitoba Public Insurance to bring more awareness to an important and underfunded cause,” said the Suzio family. “We are also very proud to be leading Canada as the first province to bring forth an initiative of this kind.”

Madox’s Warriors was created in honour of Winnipegger Madox Suzio, who passed away in 2014 at the age of nine after a heroic battle with diffuse intrinsic pontine gliomas (DIPG). Madox’s parents, Marco and Suzanne Suzio, have since dedicated themselves to raising awareness about childhood cancer, establishing the foundation.

DIPG are highly aggressive and difficult-to-treat brain tumors found at the base of the brain. Approximately 300 children are diagnosed with DIPG each year, usually between the ages of five to nine.