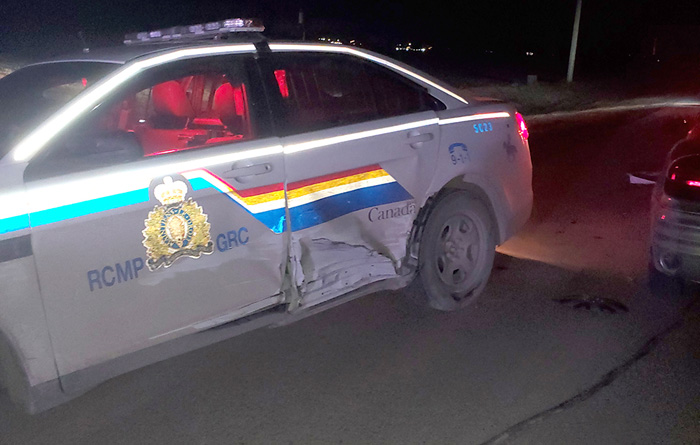 A 38-year-old Steinbach man, found to be impaired, was recently arrested by RCMP after the car he was driving crashed into a patrol car on Old Tom Road in Steinbach, Manitoba.

On the evening of April 19, 2021, Steinbach RCMP were patrolling for a vehicle after receiving reports that the driver may be impaired. While driving northbound on Old Tom Road in Steinbach, officers saw the vehicle coming towards them. The driver was traveling southbound, but swerved into the northbound lane, coming directly toward the police vehicle.

Police say that the officer driving the patrol car took immediate evasive action and veered to the right. At this point the suspect vehicle struck the rear driver side door of the RCMP vehicle. Police noted that the officers were uninjured in the collision and were able to exit the vehicle to check on the other driver.

RCMP report that the driver of the suspect vehicle, a 38-year-old Steinbach man, was uninjured but showed visible signs of impairment. He was arrested at the scene after tests showed that he was over double the legal limit of 80 mgs of alcohol.