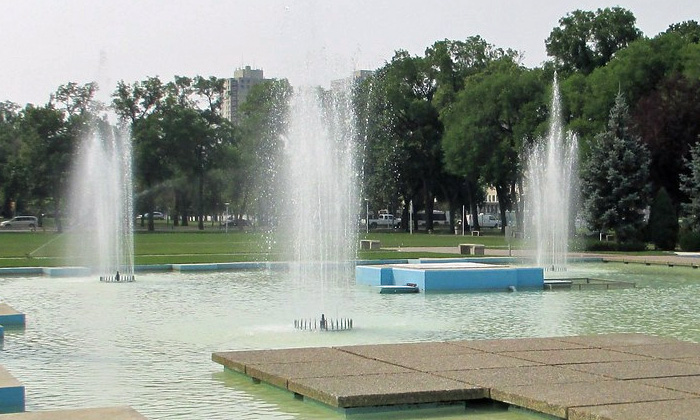 Steinbach MLA and Public Affairs Minister Kelvin Goertzen, announced that the province has completed extensive repairs and refurbishing of the Memorial Park fountain and it is once again on display for Manitobans to enjoy.

“This fountain is the centrepiece of the park, and has created memories and entertained Manitobans and visitors for decades,” said Goertzen. “Our government made a commitment as part of our MB 150 celebrations that it would be refurbished and we are pleased to see the work has now been completed.”

Conceived in the late 1950s, former premier Duff Roblin envisioned Memorial Provincial Park as “a fitting tribute to those who gave their lives for Freedom”. The provincial park, including the ‘City Hydro Fountain’, is recognized as a Canadian military memorial (dedicated on Sept. 28, 1962). The fountain recognizes the 50th anniversary of City (Winnipeg) Hydro’s inception in 1911, was designed by Cameron Man, and cost over what would be $1 million today to complete.

The original water feature included a central mechanized fountain, which was state of the art for the time. It allowed the fountain to have sweeping waterscapes and light shows that alluded, in colour and movement, to the northern lights. In the late 1990s, the mechanized central fountain began malfunctioning, was found to be too costly to repair and was decommissioned. The province announced this massive refurbishment project for MB 150 in 2019.

“This fountain project has faced some challenges due to supply chain issues due to the pandemic and to the age and condition of the fountain basin,” said Central Services Minister Reg Helwer. “However, everyone worked as a team and met the challenge, and the almost 60-year-old fountain is once again ready to delight visitors for many years to come.”

Restoration and repairs cost $3.7 million and the fountain returned to operation this past week.