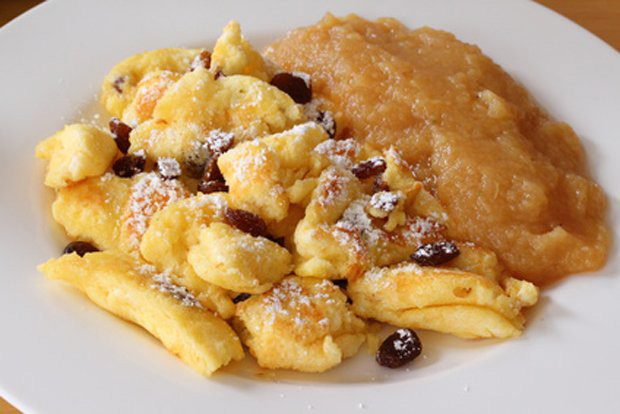 Heat butter in a pan, pour in batter, sprinkle with raisins.

Cover the pan with a lid and cook app. 3 over medium flame until brown underneath. Turn the omelette and cook the second side until brown.

Tear the omelette with two forks into little pieces. Serve immediately, dusted with sugar. Stewed fruit goes well with it.

There are a few stories of how this popular Austrian dessert originated. The one I remember hearing as a child was as follows: the new chef in the Imperial kitchen was nervous in making dessert for his new employer, knowing Empress Elisabeth (Sissi) was very obsessed with her slim figure. He threw all the ingredients together and, due to his shaky hands he scrambled it into something that resembled a pancake. He covered up the mess by spreading plum jam on top of it. The Kaiser (Emperor) loved this new dish and it quickly became known as Kaiserschmarrn, (Emperor’s mishmash).