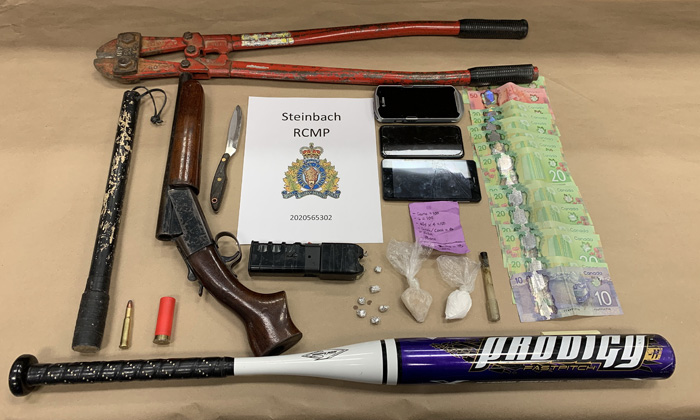 Items seized by RCMP during the traffic stop.

Steinbach RCMP have charged a St. Adolphe and Winnipeg man with numerous firearms and drug related offences, resulting from a recent traffic stop.

On May 4, 2020 at approximately 10:35pm, Steinbach RCMP conducted a traffic stop, after receiving a complaint of vehicles racing along Main Street in Steinbach, Manitoba.

Police say that as a result of the traffic stop, 20-year-old Deymon Cretain from Winnipeg and 24-year-old Jonah Wiens from St. Adolphe, were both charged with numerous firearms and drug related offences. Included in the charges were possession of a weapon obtained by crime and possession for the purpose of trafficking.

RCMP report that both accused were remanded in custody and appeared in court on May 6, 2020 in Winnipeg.